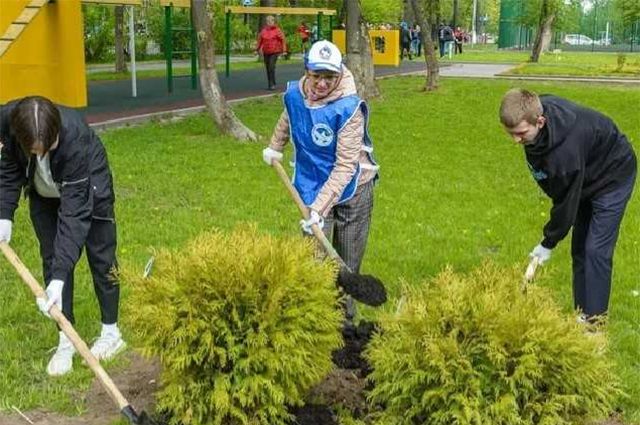 Graduates of Russian schools decided to commemorate the heroes of the Great Patriotic War. On the day of the last call, they also held the “Garden of Memory” campaign. It has become a good tradition among the students. Indeed, 80 years ago, in fact, their peers went straight from school to the front.

One of the main events took place in the capital's school No. 354 — here the garden became a memory of the students and teachers who took part in WWII. Among them are Heroes of the Soviet Union Evgeny Menshutin and Alexander Lukyanov, as well as Fedor Kharchevin and Dmitry Karbyshev, whose name the school bears.

“This is an action that holds a single thread of memory about the heroes who defended our people during the Great Patriotic War, when our multinational and multi-confessional people suffered hard trials. This test was passed by great people who made our future and present possible. These trees will become a symbol of memory that makes us citizens of our country and real people, — said First Deputy Minister of Education of the Russian Federation Alexander Bugaev, who arrived to congratulate the graduates on the holiday and took part in the planting.

Victor Grigoryevich Tarasov, a veteran of the Great Patriotic War, became the guest of honor of the event. He noted that children are anxious about their history and the memory of their ancestors.

“I have been working here for 15 years, even more. I have always seen and felt the attitude towards the memory of heroes. Here they honor their great memory. This promotion — it is a continuation of the love that has protected us and our country. We are proud of them, and we are fulfilling this mission, », — Viktor Tarasov said.

According to its organizers, the action, which is taking place throughout Russia, has not only an important patriotic significance and symbolizes the continuity of generations. It also performs an ecological function. Preserving the memory of their ancestors, young people learn to take care of nature.

“We see with what gratitude and awe the students pay tribute to the memory of the heroes of the Great Patriotic War, and what great interest they have in the process of planting trees.  Memory Garden at School — this is not only about memory, it is also about environmental education and the development of the school forestry system. Such an integrated approach allows schoolchildren to develop a sense of responsibility for themselves and our nature, to improve the ecology of Russia every day, — underlined General Director of ANO “Garden of Memory” Olga Stepchenko.

Also, school No. 1601 named after Hero of the Soviet Union Yevgeny Kuzmich Lyutikov. Three times wounded, Lyutikov blew himself up and the enemies surrounding him with the last grenade. In memory of him and other heroes of the Great Patriotic War, graduates, along with teachers and veterans, planted arborvitae.

“Today we are honored to plant trees. We will plant each of them with the thought that someone shed his blood during the Great Patriotic War, gave his life for us to be a strong and powerful state today. Each of us carries a piece of the heart of our hero», — said principal of school No. 1601 Victoria Kolesnichenko.

We also planted trees in the school yard on Vernadsky Avenue. One of them is dedicated to a resident of the Troparyovo-Nikulino area Batov Mikhail Lukich. He went to the front on June 23, 1941, leaving his wife and young children at home. Mikhail Batov served in the infantry, participated in military operations in the first two years of the war, and also worked as a driver. He went missing in 1942.

The “Garden of Memory” was also laid. and in Bashkortostan. It appeared near the school named after Rustem Abzalov. Graduates dedicated trees to fellow countrymen — participants of the Great Patriotic War: Muvarak Yusupov, who received the medals “For Courage”, “For the Liberation of Warsaw” and “For the Capture of Berlin”, to Nikolai Kalashnik, who was awarded the Orders of Lenin and the Patriotic War and awarded the medals “For the Liberation of Stalingrad”; and “For Military Merit, Mirgazit Farkhutdinov, Vasily Shibanovand many others.

The tradition was also supported by the students of the Arefinskaya secondary school in the Rybinsk district of the Yaroslavl region. Every year, the Alley of the Fallen is replenished here with one tree. Another garden was laid out by former schoolchildren together with teachers of secondary school No. 102 in Voronezh. Commemorative trees were planted in honor of nurses Clavdiya Rosinaand Alexandra Filimonova, who in total saved more than 150 wounded soldiers, as well as in memory of pioneer Yuri Pavlov >, who was only 13 years old when the war began.

Memorial trees are now in Buryatia. On the territory of school No. 52, reminders of patriotism and courage of the heroes of the Second World War will grow. Children in Orenburg also took part in the action of memory. Graduates of the Deminsk secondary school in the Ponomarevsky district planted trees, and not only in memory of those who died during the Great Patriotic War, & nbsp; but also about those who died during the special military operation in Ukraine. Among the guests of honor were children of the war, veterans and the widow of Captain Evgeny Alyabyov, who died in Ukraine on March 3 at the age of 31.