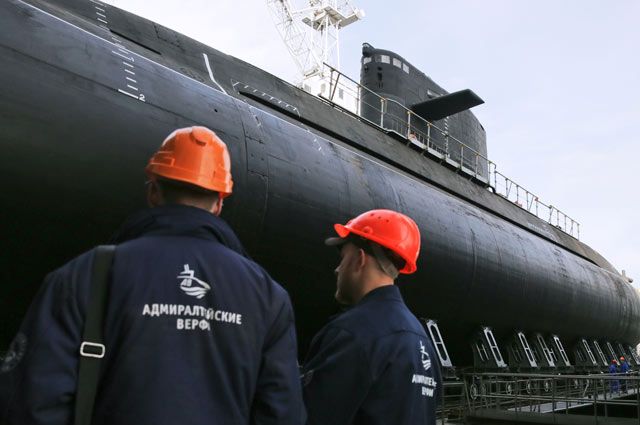 Laying of two diesel-electric submarines of project 677 “Lada” will take place in 2022 at the St. Petersburg enterprise “Admiralty Shipyards”, said the head of the United Shipbuilding Corporation Alexei Rakhmanov. At the enterprise, everything is ready to start construction, but the exact dates for the laying of two new diesel-electric submarines will be determined by the customer — Ministry of Defense of Russia. The main question regarding the new submarines — will they have a revolutionary hydrogen-fuelled power plant.

It went to Lada

Diesel-electric submarine of project 677 type “Lada” belong to the fourth generation of non-nuclear submarines, they are the development of the submarines of the project 877 “Halibut”. They are designed to combat submarines and surface ships, to destroy coastal targets of a potential enemy, to lay minefields, to transport units and special-purpose cargo.

The contract with the military department for the construction of two submarines was signed in June 2019.

“Lada” is one of the most ambitious projects of the Russian Navy. The construction of submarines was greatly delayed due to the long development of a revolutionary power plant using hydrogen fuel, so for now they are equipped with conventional diesel-electric engines. However, even now the noise level produced by the submarine does not exceed that of normal sea sounds, thus, it is a low-noise submarine.

Theoretically, after the installation of an air independent power plant, their noise level will be even lower than the background level in the sea. That is, it will be almost impossible to detect them. However, what kind of installation will be on the new submarines, there is no information. A hydrogen fuel cell installation would keep the boat from resurfacing for up to three weeks.

Hydrogen, for safety reasons, is planned not to be stored on board in high-pressure tanks, but to be produced from diesel fuel and oxygen.

The lead submarine of project 677 “St. Petersburg” Since 2010, it has been in trial operation in the Northern Fleet, which was planned to be completed before the beginning of 2017, but did not have time. She was launched into the water in 2004. In April 2020, she arrived at the Kronstadt Marine Plant for modernization. At the end of September 2021, it was announced that the trial operation of the submarine was completed.

Submarine of the Kronstadt project laid at the “Admiralty Shipyards” in 2005. Construction was suspended and was resumed only in 2013. In September 2018, the submarine was launched. In December 2021, sea trials of the Kronstadt began. In April, the enterprise “Admiralty Shipyards” reported that the second stage of factory sea trials of the submarine “Kronstadt” project 677 was completed.

«Admiralty Shipyards» completed the submarine “Kronstadt” according to the adjusted project, based on the results of trial operation of “St. Petersburg”. Compared to its predecessor, the navigation system has been improved and a quieter and more powerful electric propulsion system has been installed. Also added the ability to use cruise missiles “Caliber” from torpedo tubes. Looks like “Kroshtadt” there will also be a submarine “Velikiye Luki”.