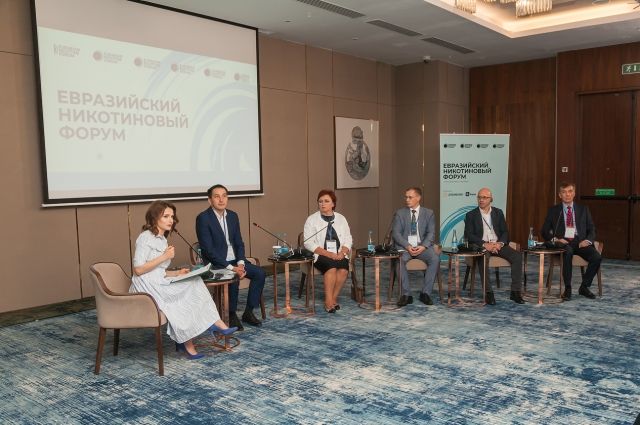 The First Eurasian Nicotine Forum was held in Kazakhstan. For the first time in the CIS experts discussed the regulation of the circulation of tobacco and nicotine products, as well as scientific approaches to reasonable consumption of nicotine and reducing the harm of smoking.

They don’t want to quit

The issues of reasonable consumption of nicotine, repeatedly discussed at various international summits, this time became the subject of discussions within the framework of the Eurasian Economic Union (EAEU), bringing together more than 350 scientists, experts, practitioners, in offline and online formats, opinion leaders, as well as representatives of the state, business, public and non-profit organizations from different countries.

The forum in Nur-Sultan was organized by the Skolkovo Foundation in partnership with the National Chamber of Entrepreneurs of the Republic of Kazakhstan “Atameken” in connection with the concern of the members of the EAEU — Russia, Kazakhstan, Armenia, Belarus and Kyrgyzstan — a number of problems associated with smoking.

According to the WHO, which were announced at the forum,  due to diseases associated with smoking, every 8 million people die on the planet of which 7 million — actual smokers, 1 million — smokers are passive.

There are over 37 million smokers in the EAEU countries. In Russia alone, according to Rosstat, approximately every fifth     smokers and this is more than 32 million people, and many of them can give up cigarettes even for a day           >

The total number of smokers is declining rather conditionally: in 2000, 1.4 billion of them were registered in the world, in 2022 — 1.3 billion. The decrease, according to WHO, is almost nominal.

Such figures cannot but puzzle both scientists and entire states — damage not only to the health of specific people, but also the economy and demography.

What is the alternative?

The real way out of this situation many scientists and experts see in the replacement of traditional cigarettes with alternative ways of consuming nicotine which reduces health risks and the consumption of carcinogens by 90-95%. There are quite a lot of such  ways in the world — we are talking about tobacco heating systems, vapes, electronic cigarettes. And in addition to them, non-smoking products, such as nicotine packs, chewing tobacco and snus.

“On the one hand, — he said, — it is regulation. At the same time, we must understand that the prohibition and regulation of — they are completely different things. Secondly, it is informing, educating & nbsp; consumers. People should be aware of the risks of smoking and nicotine use, as well as being aware of alternative products and related ways to reduce the risks. Thirdly, if we say that nicotine addiction — is a disease, then there must be support for people who want to stop using tobacco.

Alexandrov called the concept of harm reduction the fourth stone.

Deputy Director for Research and Innovation of the All-Russian Research Institute of Tobacco, Shag and Tobacco Products Evgenia Gnuchikh and Head of the Testing Center for Tobacco and Tobacco Products of this Institute Tatiana Perezhogina told their research. Based on their foundation they presented scientifically sound approaches to regulating innovative products on the content of nicotine and harmful substances.

“The path of regulation is long” and difficult, but it is more correct than “ban”, — concluded Gnuchikh.

Sharon Goodal, leader of a team of scientists at the BAT Research Center, shared the results of a long-term study, the purpose of which was to evaluate glo. Six-month observations, in which 500 people took part, according to her, showed that complete switching of smokers from cigarettes to consumption of the tobacco heating system glo is practically equal to a complete cessation of smoking. Deputy director spoke about the study of nicotine packs in Science of the Institute of Biochemical Physics. Emanuel RAS Alexey Trofimov. The work of scientists showed that these non-smoking tobaccoless products are the safest way to deliver nicotine to the body.

“Even after using snus or nickpacks for a short time, — said Trofimov, — smokers did not seek to return to smoking cigarettes, but were looking for alternatives that were less toxic to them — electronic cigarettes or tobacco heating systems. According to the speaker, the potential for this category is very high.

«We have lost an effective tool for consumers to quit smoking, — he noted. — Therefore, it is worth reviewing the regulation and bringing these products back to the market.”

As noted many speakers attempts tobacco control through bans have been conducted for more than a decade but the situation remains virtually unchanged Therefore, perhaps it is worth paying attention to an alternative policy, which  on a scientific approach and which is listened to in many countries in the West.

Representative of the international organization MOHREJoan Rossi Masongave several examples. For example, in the UK, she said, the government used a science-based approach to promoting vape products because it saw positive aspects in the impact on the body of alternative products to tobacco. As a result, the number of smokers of regular cigarettes has decreased, they have switched to less dangerous products.

At the same time, a unified regulatory framework for new nicotine-containing products in the space of the EAEU is still practically absent. This was discussed by Head of the Quality Infrastructure Development Department of the Ministry of Economy of Armenia, a member of the working group on the development of the technical regulation of the EAEU for nicotine-containing products Zhanna Zakaryan. She noted that  sticks for tobacco heating systems, liquids for electronic nicotine delivery systems, oral nicotine products — these are products other than cigarettes and other smoking tobacco products that require separate regulation. But it has not yet been determined.

Zakarian also expressed concern that due to the lack of applicable mandatory requirements for these products,            reported that the development of the EAEU technical regulations was entrusted       Ministry of Economy  with such an initiative.

« at the moment, — Zakaryan said that a complete set of documents has been sent to the Eurasian Economic Commission in order to include it in the agenda of the next meeting of the Advisory Council. She also commented on the initiative to remove some nicotine-containing products, including tobacco heating systems, from the scope of the technical regulation: “Exclusion of any type of product from the scope of this regulation will not allow for the timely and effective establishment of safety requirements for such products.”