Armored car «Gadfly» was developed in 2015 by a team of employees of the engineering center of the Zhytomyr armored plant on the chassis of the Soviet army truck GAZ-66. The armored car was created on the “shishigi” chassis. — Soviet all-terrain vehicle GAZ-66. The power of the new engine — 130 l. With. Speed ​​on a good road — 95 km/h. Power reserve — 1200 km. Currently, the armored car has been handed over to the Ukrainian Armed Forces. 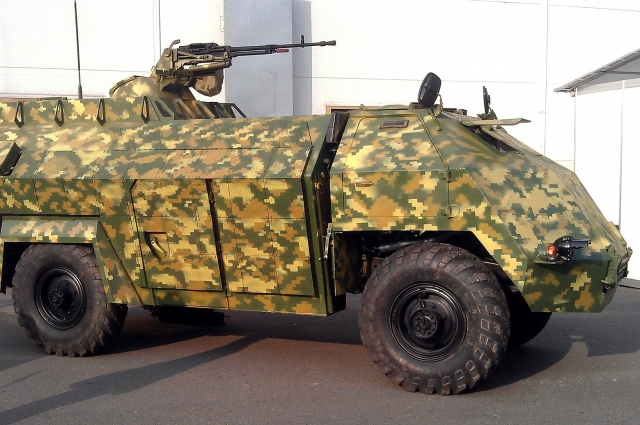 The armored vehicle is designed to transport troops, cargo, and transport the wounded. It can also be a headquarters vehicle or a mobile repair shop. Seven years ago «Gadfly» was demonstrated with a 12.7-mm machine gun NSVT “Utes”, then it was replaced by the DShK. And, apparently, the armored car received such bad reviews that the developers urgently took up optimization. Just three months later, a new, improved version of the machine was presented. She had an increased cabin ceiling height, a troop compartment appeared for firing small arms, and the seats can also be transformed into lying places to accommodate the wounded. The SN-3003 “Basalt” navigation system was also installed.

The armored vehicle has a cabover layout with a front engine and control compartment, and a troop compartment is located in the middle and aft parts of the vehicle. At the bottom of the sides and in the stern — hatches for landing and landing.

The seats are replaced by a bench in the center, the only way to get to the combat module — is to stand with your feet on the seat in the center.

The body of the armored vehicle is welded from steel armor plates. This armor provides protection against small arms fire and can be enhanced by installing a set of hinged armor in the form of flat perforated steel plates on the sides of the troop compartment. The weight of this kit — about 200 kg, and, according to the manufacturer, with such protection, the machine is invulnerable to armor-piercing bullets from a distance of 30 meters and more.

The developers hoped that 12 infantrymen and 2 crew members could fit in an armored car. However, it is difficult for people even with average height to be there, to say nothing of large paratroopers. According to the developers, a driver with a height of about 170 centimeters should fit in it. In the event that a fighter is taller and of a large build, and even in full uniform, in a bulletproof vest and a helmet, he simply will not be able to get inside. The armored car is so low that the driver is forced to drive with his head stuck out through the hatch. In addition, the hatches are too small for a person in full gear to easily leave the car.

The arrangement, in which the driver and passenger sit over the front wheel on a hot engine, is extremely dangerous. In the event of a mine or land mine explosion, these fighters have catastrophically little chance of surviving. In fact, the armored car is deprived of mine protection.

The car also lacks loopholes for firing from the cab. There is no air conditioning at all, but a device resembling gills is installed as ventilation above the screens.