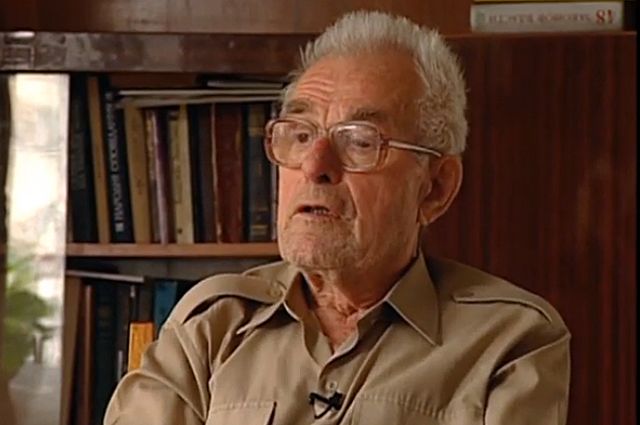 The legend of perestroika times says that “the bloody Stalinist regime was exclusively occupied with eradicating freedom fighters of various stripes to the root.” In particular, this applies to the Baltic and Ukrainian nationalists.

However, after the collapse of the USSR, mass actions with the participation of collaborators showed that in reality the authorities showed humanism towards Nazi accomplices . Which given the current realities seems redundant.

The RIA Novosti agency received access to declassified materials of the case of one of the initiators of the revival of the OUN organization (banned on the territory of the Russian Federation) during the perestroika years in Ukraine Bogdan Kohut.

The official biography of Kogut, a man revered in Nezalezhnaya says that a native of the Ternopil region in the 1930s, at school age, joined the nationalists operating in Poland, following the example of his father.

Ukrainian sources write extremely sparingly about Kohut's activities during the Great Patriotic War — allegedly arrested by the Germans, then released, retreated to the West with them, participated in the construction of defensive structures, and then suddenly found himself in the ranks of the Russian Liberation Army (ROA) of General Vlasov.

Teaching after the Gulag

After the end of the war, the Americans handed over the Vlasovites to the SMERSH authorities, and Kogut ended up in the camp. In 1948, according to Ukrainian sources, he was sentenced to death, which was commuted to 25 years in camps, 10 years in exile and 5 years of loss of civil rights.

In reality, Kohut was released in 1956, but was not declared eligible for rehabilitation. In addition, he was banned from living in Western Ukraine.

However, the former prisoner of the Gulag settled well in the east of the republic — graduated from Odessa University, after which he taught English at a school in Nikolaev, and then at the Nikolaev Shipbuilding Institute.

During perestroika, Kohut moved to Lviv, where he became one of the initiators of the revival of the OUN, as well as the ideological inspirer of a new generation of nationalists. In independent Ukraine, his books were actively published, he became a member of the Writers' Union of Ukraine, a laureate of a number of literary awards.

What did the “innocent” do?

Kohut, who made fiery speeches about the victory over totalitarianism until his death in 2011, did not really explain why he received such a harsh punishment from the Soviet authorities. Ordinary members of collaborationist formations, including even SS divisions, received, as a rule, no more than 10 years in prison. It turned out that there was something in the biography of the Ukrainian nationalist that Kohut himself categorically did not want to remember, because he could not fit it into the framework of “guilty repressions”.

And now the journalists finally could get acquainted with pages of the biography of the “Ukrainian hero”.

According to German documents, in 1942 Kogut joined the SS supervisory service, passing it in the department of the Lublin District Police Fuhrer. He was trained as a warden in the Travniki concentration camp, in the same place where such famous Nazi executioners as Fyodor Fedorenko and Ivan Demjanjuk.

“Personally participated in the destruction operation”

In his testimony, Kogut said that he served as a warden, but denied any involvement directly in the destruction of people. But witnesses testified that Kohut diligently carried out his functions, including liquidation operations.

The indictment reads: “He personally took part in the operation to exterminate Jews in Warsaw, escorted the inhabitants of the Jewish ghetto to the Treblin death camp, participated in punitive operations against Polish partisans».

It is interesting that it took the investigators more than two years to establish the truth about Kogut, during which the collaborator exiled to the Far East lived under minimal restrictions. At the time of his arrest, he was generally a civilian worker … in a military warehouse.

Kohut had every reason to receive a death sentence for the atrocities committed and participation in the mass extermination of people. However, his case was considered in 1948, during that short period when the death penalty was abolished in the post-war USSR. So the concentration camp guard received a 25-year sentence instead of being shot.

Not every kindness to the fallen is good?

Kohut's life in the Soviet Union after liberation was quite successful, and after the collapse of the country he completely turned into a guru of Ukrainian nationalism. Without dedicating, of course, anyone in the details of his biography.

Although today in Ukraine he would be forgiven for his involvement in the genocide. Official Kyiv offers exclusively pathological sadists and murderers as role models. Kogut fits perfectly into this warm company.