An expert assessed the political course of North Korea

The Democratic People's Republic of Korea recognized the Donetsk and Luhansk People's Republics. The recognition document was handed over to DPR representative Olga Makeeva by North Korean Ambassador to Russia Sin Hong-chul today. A meeting with the Ambassador of the LPR is also expected soon. The parties agreed on further cooperation, including in the economic part. We learned how such cooperation is possible, and what kind of reaction we can expect from America. 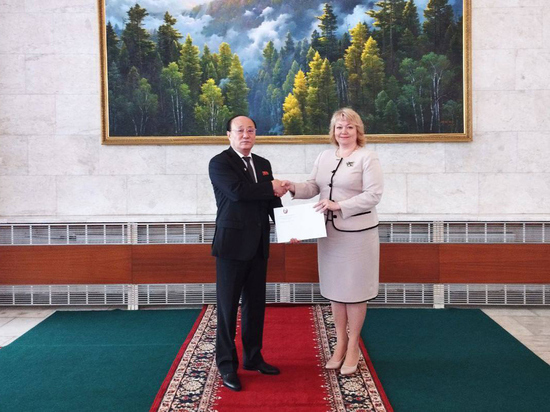 This week, two important steps took place in the statehood and sovereignty of the DPR. Yesterday, the opening ceremony of the embassy of the Donetsk People's Republic took place in Moscow, where the flags of Russia and the DPR were raised. In the capital, the diplomatic department is adjacent to the embassies of Ireland, Portugal and Japan, as well as to the representation of the Red Cross. Today, the public is discussing another news – the independence of the DPR was recognized by North Korea. A country with nuclear power is a geopolitical opponent of the United States of America.

According to the head of the DPR Denis Pushilin, recognition is another victory for the republic. Recognition will be “the basis for further development of relations in the economic sphere,” he said on social networks.

Earlier, the independence of the people's republics was recognized by Russia, Abkhazia, Syria and South Ossetia. Aleksey Makarkin, a well-known political scientist and deputy director of the Center for Political Technologies, told MK about the significance of this event in geopolitics and how the United States will respond to it.

“I think this is a symbolic step,” the expert says, “North Korea has such a damaged relationship with America that it can recognize whoever it wants without paying attention to it. As they say now, they want to “troll” America. For the LDNR, this is another recognition, a demonstration that the republics were recognized by more than one Russia and its closest allies. Economic cooperation is hardly possible here, since it is built on long-term relations, and the LDNR has set a course for integration into Russia.

– The fact is that the LDNR has already been recognized by one nuclear power – Russia. I don't think it matters much. North Korea will not share nuclear weapons with the people's republics, that would be strange. Remember how they recognized Abkhazia and South Ossetia. They were then even recognized by such a little-known state as Nauru. It was politically important that they be recognized not only by Russia. And the DPRK, by the way, is a member of the UN.

– Under Trump, there were negotiations at the highest level between the United States and the DPRK. Trump made a bet on this, but at some point he realized that he could not agree. And no further bets were made on rapprochement, which is continuing now. There is no dialogue between these countries. And America can't do anything. Here the problem is still in South Korea, since historically it is one country. When the US starts pushing in any way, South Korea gets worried. Firstly, there are relatives there, and, secondly, no one wants a conflict with a nuclear country.