U.S. President Joe Biden insists his trip to Saudi Arabia is for everything from increased security in the region and ending with the establishment of bilateral relations. However, the main task of the American leader is still to get as much oil from the Saudis as possible. At the same time, Politico journalists are confident that the head of the White House, as part of his Middle East tour, is unlikely to be able to persuade the kingdom to increase energy supplies to the world market. 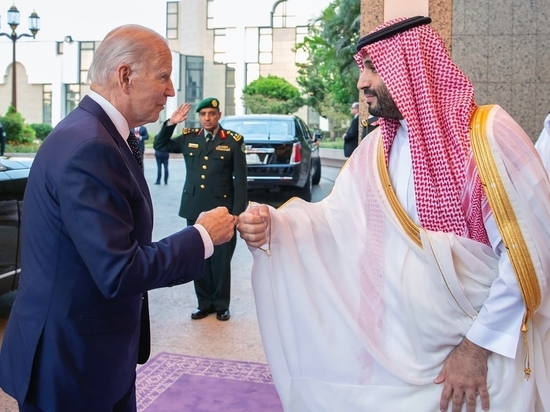 Even the toughest pressure from the American leader, apparently, would not force Riyadh to pump more barrels of oil into world markets, writes Politico. It is not clear whether Saudi Arabia, which has one of the largest oil reserves in the world, is capable of increasing it quickly enough to normalize the situation in the sector.

Even if the US president's pressure somehow worked, experts believe it could unbalance the markets, the situation in which has begun to gradually improve in recent days. Moreover, experts warn that the American “economic pain” associated, among other things, with a significant increase in gasoline prices, will also not go away.

Therefore, the Biden administration promises that the attention of the American leader during a trip to Saudi Arabia will be focused on something more than just energy.

“We look forward to advancing our interests on a wide range of issues, from terrorism to climate change to Iran,” an unnamed senior U.S. official told Politico. “This is precisely why the president’s tour was organized.”

At the same time, the source of the publication nevertheless admitted that the issue of oil will inevitably have to be raised both during Biden’s discussions with the government of Saudi Arabia, and during his meeting with representatives of the five countries of the Persian Gulf, which will be held on Sunday, July 16. Especially given the fact that global energy markets are in turmoil after the launch of Russia's special operation in Ukraine.

“We definitely look forward to taking the time to discuss energy security issues with the Gulf Cooperation Council and with representatives of Saudi Arabia,” the official added.

For decades, one of the key topics of discussion between Washington and Riyadh has been inextricably linked to oil supplies. Former US President Donald Trump, for example, criticized OPEC, while another former US leader, George W. Bush, personally urged the Saudis to increase oil production.

Over the weekend, Biden even published an article in the Washington Post in which he as if he was trying to justify his upcoming trip to the Arabian kingdom in front of critics. After all, quite recently, the head of the White House vowed to turn Saudi Arabia into a “rogue state” for human rights violations there.

It is noteworthy that Biden did not mention the issue of energy in his opinion column. He focused on other things, in particular, on the desire to “strengthen the strategic partnership” in the Middle East.

If the US president focused on trying to coax the kingdom to increase oil production or ease OPEC policy, Saudi Arabia would likely be unwilling or unable to comply with this request, analysts and diplomats say. The best outcome of the talks could be a relatively modest agreement that Riyadh will invest more in its production or expand the capacity of the Motiva Enterprises refinery in Texas, owned by the kingdom's state-owned company. So what can Americans expect from Biden's trip then?

“Not much,” said David Golvin, head of the Center for Global Energy and former State Department energy adviser. “For diplomatic reasons, I don't expect Biden to come out of there with a promise to increase oil production. For the United States, such a request would be too rude, and for Saudi Arabia, too straightforward.”

The expert believes that Joe Biden needs such a visit in order to fulfill his part of the actual agreement on OPEC+. In June, the American president asked the organization to increase oil production earlier than planned, and she silently did it.

The members of the oil producing group have announced that their collective oil production will increase by 648,000 barrels per day in July. Although earlier they planned to raise this figure by 400,000 barrels and only in August. However, OPEC has not fully fulfilled its promise so far. And there is speculation that Saudi Arabia and OPEC as a whole do not have the capacity to do so.

Analysts say that a gradual decline in oil prices could make further discussions about its production “superfluous”. The base oil price in the US has exceeded $120 a barrel several times this year. And as of Tuesday, July 12, it has fallen to $96 thanks to increased domestic production, and also due to market awareness that Russian oil is being shipped in large volumes to China and India. Plus, prices have tumbled out of fear that a recession will cut energy demand in the coming months.

One idea Biden might try to push is for Saudi Arabia and the rest of OPEC to exclude Russia from the expanded partnership “OPEC +”. Russia has been included in this group since 2016. However, domestic unification politics will likely outweigh any requests Biden might make regarding Moscow.