During the two-day unrest on July 1-2 in the Republic of Karakalpakstan, which is part of Uzbekistan, according to official data, 18 people were killed, 243 were injured, 516 were detained. On July 4, the Parliament of Uzbekistan decided to maintain the former status of Karakalpakstan, which implies its sovereignty, that is, it satisfied the main demand of the protesters. 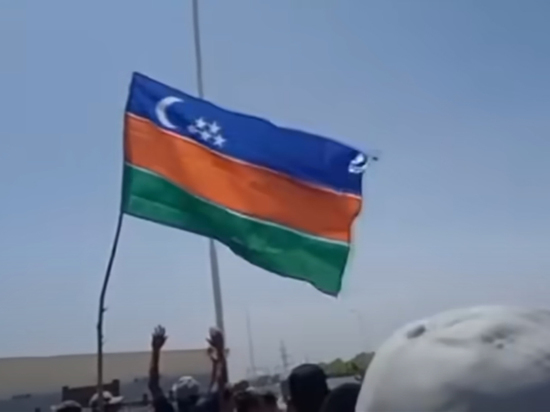 Photo: Frame from the video

The “Karakalpak revolt”, which threatened to develop into a large-scale destabilization of the whole of Uzbekistan, broke out unexpectedly and, it would seem, from scratch.

On June 25, the parliamentary newspaper Narodnoye Slovo published a draft amendment to the Constitution of Uzbekistan, which had already been approved by the lower house of parliament. Among them were amendments providing for the abolition of an article of the Constitution that secured the status of a sovereign republic for Karakalpakstan with the right to secede from Uzbekistan on the basis of a referendum. The developers of the document believed that in this way they strengthen the unity of the country.

But this led to the exact opposite result. On July 1, protest rallies began in several cities of the republic, including the administrative center of Nukus. After the arrest of a local activist, editor of the El Khyzmetinde newspaper, Dauletmurat Tadzhimuratov, who called for the “liberation of Karakalpakstan” by peaceful means, the protests escalated into riots.

On July 2, protesters were already disarming the National Guard, attacking the airport, the rehabilitation center where the detainees were kept in Nukus, and the building of the local Ministry of Internal Affairs. The leadership of Uzbekistan announced an attempted coup.

Who is behind the riots in Nukus? Alexander Knyazev, an orientalist and leading researcher at the Institute for International Studies at MGIMO, told the MK about this.

– Attempts to explain these events only by the difficult socio-economic situation in this region of Uzbekistan are wrong. Of course, the socio-economic background there is really complex. Added to this is the complex and difficult situation associated with the actually former Aral Sea.

The government of Uzbekistan has been dealing with this problem for the last 4 years in the development programs of Karakalpakstan, huge amounts of money have been invested in infrastructure construction and job creation.

But the socio-economic situation is just a background. The reasons are different. One of the reasons is the inter-elite contradictions between the local elite of Karakalpakstan and the center in Tashkent. This is the dissatisfaction of the local elite with the distribution of income from resources that are mined in Karakalpakstan – we are talking about oil, and gas, and uranium, and a variety of metals, including gold.

This is an attempt to win during the referendum in favor of greater independence of Karakalpakstan and the redistribution of financial flows from what is mined on the territory of the republic in its favor.

The second factor is external interference.

– Before Recently, only a few marginal Western websites have written about the fact that the issue of independence may be relevant for Karakalpakstan. On the eve of the events, these sites began to write about the upcoming protests. And after everything happened, it was these sites that were at the forefront of the information support of events.

They were joined by a number of Internet resources run by emigrants from Karakalpakstan, a significant part of whom live in neighboring Kazakhstan. In the 20s, for a short time, Karakalpakstan was part of the Kazakh Autonomous Republic, which, in turn, was part of the RSFSR. Later it was transferred to Uzbekistan.

– In terms of language, they are closer to the Kazakhs, and in terms of genetics – to the Uzbeks.

– I don't think it was a serious problem. Last year, there were small peaceful demonstrations in one of the cities of Karakalpakstan due to the fact that a directive was issued from Tashkent on a more accelerated transition to the Latin alphabet.

Uzbekistan switched to the Latin alphabet in 2003, but the Cyrillic alphabet continues to exist. Karakalpakstan has lagged behind in this respect. Local authorities were advised to speed up these processes. And small groups of intellectuals opposed it. But everything ended peacefully and quickly. I don't know any other ethno-cultural problems there.

– On the eve of the events, when nothing foreshadowed them yet, a large number of people from other cities appeared in Nukus. Including visitors from other countries, in particular, from Kazakhstan. Activists of non-governmental organizations.

I see no reason not to trust the way law enforcement agencies describe the events. A clear organization is visible, the leaders are dressed in special clothes, well-prepared posters, slogans, gathering people through social networks. It doesn't happen spontaneously.

I witnessed the first Kyrgyz revolution and studied these things a little. This is a classic example of a color revolution. When there is dissatisfaction with the local elite, who want to put pressure on the government in their favor through a mass protest. This is the first moment. The second point is the difficult socio-economic situation. As a result, there is a large number of marginalized youth from rural areas who are unemployed and educated, susceptible to nationalist slogans.

The third point is that this is supported from the outside, in order to create an instrument for further pressure on the authorities in Tashkent. What we see. I think Uzbekistan will be pointing to these events for more than one year.

– Yes. These amendments simply created a pretext. Marginal youth are always very passionate and easy to turn on. A similar mass of people was in Karakalpakstan. Similar people smashed shops in Alma-Ata in January, participated in all the Kyrgyz revolutions and the civil war in Tajikistan.

– There is a conspiracy version, which, I am sure, will be confirmed. Of all the republics of Central Asia, Uzbekistan began to interact most actively with the Russian Federation against the backdrop of anti-Russian sanctions. It is no coincidence that in June the US State Department and the US Treasury created the first precedent for secondary sanctions, which specifically targeted an Uzbek company working with Russia. She is included in the sanctions list. I think this is a lever of pressure in order to rein in Uzbek activity in cooperation with the Russian Federation.