“The parties must show that they still have muscles”

Greece is concentrating its armed forces in the area adjacent to the Turkish border. Such messages are actively disseminated by Turkish intelligence. According to her, several dozen tanks, up to 60 armored personnel carriers and infantry fighting vehicles were seen in the area of ​​the Maritsa River. Ankara reacts seriously to such actions of the Greeks, believing that Athens is preparing for a large-scale military clash with the Turkish army in Western Thrace. An expert assessed the likelihood of a military escalation between the countries. 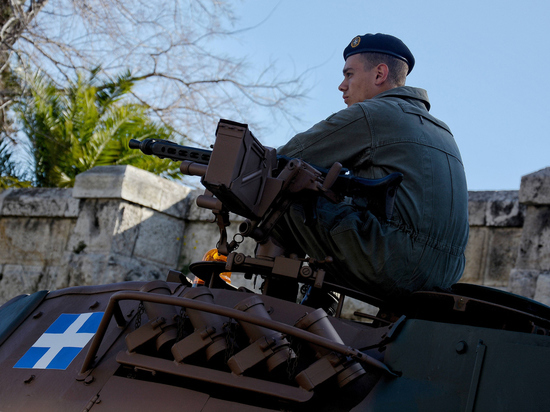 Dozens of tanks and armored personnel carriers of the Greek armed forces were seen on the border between Turkey and Greece, avia.pro reports. It is alleged that they are deployed en masse about three kilometers from the border with Turkey, which, from the point of view of a number of local media, may indicate a possible start of an armed confrontation between Athens and Ankara.

It is reported that several dozen tanks, as well as at least 60 armored personnel carriers and infantry fighting vehicles, were pulled into the area of ​​​​the Maritsa River. After unloading, weapons are immediately deployed in already prepared field fortifications.

“According to photographs and information provided today by sources in Western Thrace, Greece is intensively moving armored vehicles and tanks to the Turkish border, – note Turkish information resources. – Earlier, the Greek armed forces began to dig anti-tank trenches on the banks of the Maritsa River, which forms the border line between Turkey and Greece in Western Thrace.

They also stressed that back in early June, “due to threats from Ankara» Athens put the army in the eastern Aegean on high alert. However, there have been no official statements from Greece on this matter yet.

“In my opinion, a serious military escalation between Turkey and Greece should not be expected,” comments MK. Alexei Obraztsov, Leading Research Fellow at the HSE Center for Asian and African Studies. – In this regard, Turkish leader Recep Tayyip Erdogan is likely to make some kind of incendiary speech, saying that we have always said that the Greeks – people are unreliable, that they violate everything that is possible. The head of state will definitely add that, for its part, Ankara was regrouping insignificant border forces on its territory, so this should not concern anyone.

In addition, one of the reasons for the demarche of the President of Turkey regarding the entry of Sweden and Finland into NATO was associated with the desire to stabilize and advance in a positive way the position on Northern Cyprus. Accordingly, Athens will now also try to win back the lost points.

Meanwhile, according to the expert, things are unlikely to come to a real collision. In the end, both countries – members of the North Atlantic Alliance and they will very quickly be put on the stools intended for them.

“For the sake of the foreign and domestic political situation, from time to time both Turkey and Greece must show that they still have muscles,” the political scientist continues. – Theoretically, some frivolous border clashes are possible, because each side has territorial claims to each other. But, since both states are members of NATO and are closely linked by bloc obligations, it is unlikely that this will result in something significant.

At the same time, some Western observers believe that if a new armed conflict breaks out in Europe, it could be a clash between Turkey and Greece.

One of the sore points in relations between the two neighboring countries – the so-called “Aegean Question”. This is a whole complex of controversial topics between Turkey and Greece regarding the sovereignty of certain territories and related rights in the Aegean Sea and the airspace above it. Twice – in 1987 and at the beginning of 1996, this topic led to crisis situations close to a serious armed confrontation between two neighboring states.

So it turns out that, at least at the level of the rhetoric of the policy of the high level do not exclude the use of force to resolve the accumulated contradictions. Although for NATO it would be “nightmare” a scenario that the alliance will do its best to prevent.

In modern times, tensions between Athens and Ankara in the Aegean have risen due to the migrant crisis. Turkey accuses the Greek authorities of pushing back illegal migrants trying to enter Europe. On Sunday, it was reported that Turkish security forces had rescued migrants “thrown back” on two life rafts by the Greek Coast Guard at sea.

Hundreds of thousands of refugees have made short but perilous journeys across the Aegean to reach northern and western Europe in search of a better life in recent years, according to the Turkish Daily Sabah. Turkey and Greece have proven to be key transit points for migrants. Ankara has accused Athens of massive refusals to accept refugees, deport and deny migrants access to asylum procedures, which is a violation of international law. Ankara also accuses the European Union of turning a blind eye to this “egregious violation of human rights.”

Did not contribute to the strengthening of Turkish-Greek mutual understanding and speech in May Prime Minister of Hellas Kyriakos Mitsotakis in a speech before both houses of the US Congress. The head of the Greek government told American lawmakers Athens' arguments in favor of acquiring the F-35 stealth fighter from the United States and against Turkey's permission to upgrade its F-16 fighters with new missiles, radar and electronics.

Erdogan reacted very sharply to this: “We once again warn Greece to avoid dreams, statements and actions that will lead to regrets, as it was a century ago.” Greece's catastrophic defeat in 1922.

On the way to the NATO summit in Madrid in June, Erdogan said he refused to meet with Mitsotakis until the Greek prime minister “pulled himself together”: “We said:” I'm sorry, but we don't have time for such a meeting right now. Because it is obvious that they are militarizing the islands. Later that day, the Turkish leader said that Ankara had no desire to go to war with Greece, but immediately blamed Athens for 147 violations of Turkish airspace.