Plot Special operation of the Russian Federation in Donbass and Ukraine

In Russia, a technique has been created that can move on almost any terrain. In particular, we are talking about the DT-3PM articulated armored transporter. In addition to delivering various cargoes and personnel, they are ways to conduct air defense, carry artillery installations and multiple launch rocket systems. 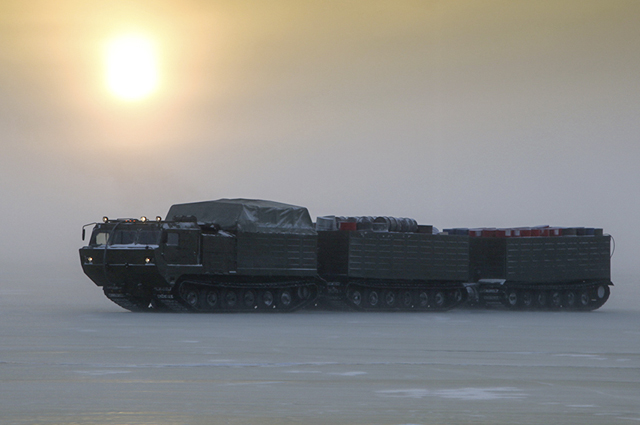 The DT-3PM armored personnel carrier is intended for operation in particularly difficult road and climatic conditions without preliminary reconnaissance and engineering equipment of routes and can be used as a base for mounting various weapons or special equipment.

The equipment can operate in difficult climatic conditions , where 70% of the territory is swampy, and the air temperature ranges from -55 degrees in winter to +35 degrees Celsius in summer.

The novelty is supposed to be used for exploration, fast delivery of small cargoes and people to remote areas of the area  for the maintenance of oil pipelines and the construction of new stations, including in the Far North.

DT-3PM is a modified armored version manufactured by JSC “MK” Vityaz “. since 2010.

The all-terrain vehicle is equipped with a 4-stroke 6-cylinder in-line turbodiesel from «Cummins» QSB 6.7 with a volume of 6.7 liters.

Prototypes of DT-3P successfully passed industrial and operational tests, during which their high technical parameters were confirmed.

The test drive took place for more than six months on the territory of an oil and gas pumping station 500 km north of Novy Urengoy. The car passed over 9000 km without any serious remarks and deep snow cover, and waterlogged clay, and peat bogs, and easily crossed water barriers. The conveyor passed a sea test from October 2018 to April 2019 under the program of operational tests between JSC “MK” Vityaz ” (part of the UVZ group) and a potential customer.